Since this blog is meant to be a journal of sorts, and more and more I find myself using Facebook as a quick way to summarize happenings in our lives and tell funny stories, I thought I should capture recent status updates on the blog so that some of these anecdotes aren't lost. Readers, feel free to skip/ignore these. And while I realize this post could seem a little self-obsessed, please don't take it that way.

Kathy Morris Flanigan Sophie: Mama, when you grow up and get big, do you HAVE to move out of your parents' house? Mom: Well, a few people don't, but most people want to have their own house when they get big. (thinking: Aw, I have the sweetest girl EVER.) Sophie: Well, good.... because I don't want to spend all that money!July 18 at 4:36pm

Kathy Morris Flanigan Did I have ankles before I was pregnant? Or was it just an optical illusion caused by my then-higher heels?July 16 at 10:16am

Kathy Morris Flanigan I don't know much about Lt. Gov. Ron Ramsey, but based on the materials we receive daily in the mail, his campaign managers are NUTS.July 14 at 11:40pm

Kathy Morris Flanigan ‎"Sophie, why are your Barbies dancing without shirts?" "So they can be pretty!"

Kathy Morris Flanigan is confident that NEVER has a snap-circuit electric kit made a child happier. If I'm not careful, I may accidentally learn something.July 12 at 11:03am

Kathy Morris Flanigan I think I have a Ferris and a Cameron. Does anyone want to guess which is which, or what the next one will be?June 28 at 3:01pm

Kathy Morris Flanigan ‎'s 5.5-year-old is determinedly babyproofing our house three months early. It's a good thing someone in this family is responsible!
June 26 at 8:24am

Kathy Morris Flanigan may not be as hopeless as a parent as she previously thought. :)
June 23 at 2:48pm

Kathy Morris Flanigan It was nice of the kind officer to point out that the speed limit goes up just one mile down the road from where he pulled me over. I thought that plus the pregnancy might equal a mere warning. Turns out my math was wrong.
June 16 at 9:31am

Kathy Morris Flanigan Live every week like it's Shark Week. Dress every day like you're going to get murdered in those clothes.
June 15 at 3:10pm

Kathy Morris Flanigan A book hasn't caused me this much trouble since Where's Waldo went to that barber pole factory. :)
June 9 at 2:39pm

Kathy Morris Flanigan
The future is like a Japanese game show - you have no idea what's going on.
June 9 at 3:37pm

Kathy Morris Flanigan is pretty sure her hair still smells like campfire!
June 8 at 2:11pm

Kathy Morris Flanigan Operation Raise That Van is a moderate success. Now we just have to see what happens when we load the whole family in there, including my pregnant self.
June 4 at 4:27pm

Kathy Morris Flanigan Will is skeptical on the value of stocks: "If I own a little part of Lowe's, why can't I control what goes on in that little part of the store?"
June 4 at 1:48pm

Kathy Morris Flanigan Note to self: 2 Italian ice popsicles = 3 golden minutes of silence, save slurping. Would it be inappropriate to give them 10 in a row?
June 3 at 8:46pm

Kathy Morris Flanigan forgot to consider ground clearance when committing to a new vehicle. Hubby is trying to figure out how to "raise" it to clear our driveway. Let's hope we can accomplish this without turning it into a hoopty wagon. HOA would prefer that I not park on the street for the next two years.

Kathy Morris Flanigan is going the minivan route, and is surprisingly excited about it!
June 1 at 2:51pm

Kathy Morris Flanigan Can someone please explain to me why we didn't purchase headphones for the portable DVD player two years ago when we first got it?
May 31 at 11:42pm

Kathy Morris Flanigan Really, Train? "My heart is bound to beat right out my untrimmed chest." You had to come up with a two-syllable adjective for chest, and UNTRIMMED was the best you could do? REALLY???
May 26 at 11:08pm

Kathy Morris Flanigan Kathi and Chad (who were previously our houseguests) welcomed their son into the world at 3:23 AM this morning - 15 days AFTER his due date! The details are theirs to share!
May 26 at 10:26am

A couple of weeks ago, we - along with much of our Michigan family - went up to Andy's grandmother's cottage in northern Michigan. The cottage is right on a beautiful lake. We had a great time just hanging out, swimming, boating, jet-skiing, and even collecting driftwood and minnows! It was one of our most relaxing vacations ever! 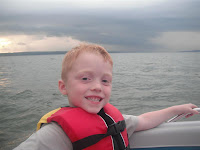 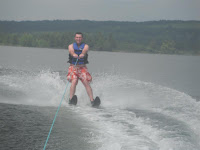 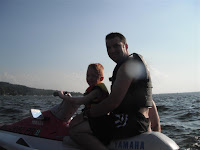 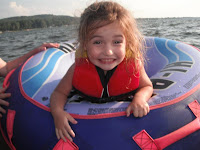 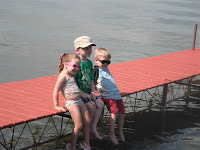 (After a two-month hiatus, I am bringing the blog back to the land of the living. I know it's not the most exciting return, but we're starting with a real estate post. Others will follow on a more reasonable timeframe.)

Here are the "after" pictures of Foxview. We're keeping this one as a rental, and it was turned over to its new residents on 7/15.