Why We Must Convince Sophie To Stay In Her Own Bed 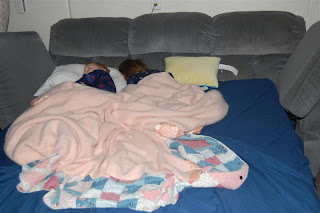 Here you see the kids sleeping in Mimi's basement at Christmas. Note Sophie's positioning. I'm pretty sure she has an onboard GPS that programs her to remain perpendicular to the bed at all times. This is exacerbated by the fact that in sleep, her limbs remarkably lose all ability to bend at their joints, or at least to remain bent for more than three seconds. And if there's a body nook around - like neck, lower back or abdomen - into which she can dig her feet, she will find it. These special abilities are really fun when you and your spouse have a queen-sized bed that - as often as not - by morning has four occupants.

Thankfully, I think we are making some progress in this area. When she comes into our room now, she asks, "Is it light outside?" because it has been drilled into her that she shouldn't come downstairs until it is light outside. The next step is honing her ability to sense light. I read somewhere that this happened in the womb, but apparently she is lagging behind in this area.
Posted by Kathy at 10:18 AM

As usual, your post made me laugh out loud. You have a gift with words!

Haha. I always sleep sideways, too. Sophie and I have a lot in common. :)