Thursday evening at Steamboat our whole family went on a dinner sleigh ride. Mom had wanted to go on a sleigh ride last year at Winter Park, but no one was offering them so late in the season. This time, we were glad she got her wish.

Since sleighs aren't at every streetcorner even in Steamboat, we began the evening with a trip to Safeway, where a retired schoolbus driven by a rancher named Rick met us to spirit us back in time to the days of horse-drawn buggies. From the schoolbus we boarded the sleigh along with a couple of friendly Aussie families.

The sleigh was pulled by two draft horses with snowy butts and a driver named Rose whose voice was aptly reminiscent of Kate Winslet's. (I have a picture of the horses' snowy butts but I'm sparing you that one.)

We dashed (OK, more lumbered) through the snow in an open sleigh, but NO JINGLES. (Andy's one criticism of the experience was that they needed to add some bells, darn it!) Instead, we heard the continuous creak of the sleigh on the snow as we traveled on a narrow path between fields that were several feet deep in snow. (We could tell this by the fence posts, some of which were almost completely covered. It's strange how you lose your perspective in deep snow, though.)

I should mention, too, that it was very cold. We had blankets, but it was still very, very cold.

After arriving at the "chuck wagon", a small barn heated (yay!) with gas stoves, we sat around and drank hot cider while we were entertained by a guitar-picker named KD (NOT Lang). Rancher Rick and sleigh driver Rose cooked our steaks themselves (a nice touch, I thought).


The horses obviously knew the routine since the sleighride back to the schoolbus was MUCH faster than the one out to the barn. I'm pretty sure this had something to do with their stables and food being nearby.

The evening was very enjoyable and a nice combination of down-home hospitality and creature comforts.

(By the way, the friendly Aussies explained to us during a tourism pitch that Australia is the size of the continental US with a population the size of New York. Definite food for thought, especially when I'm at the mall on a Saturday, at Best Buy on Black Friday or anytime my personal space feels violated.) 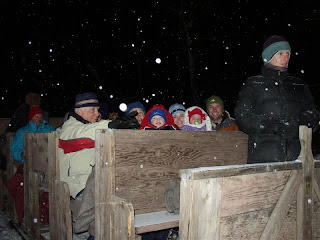 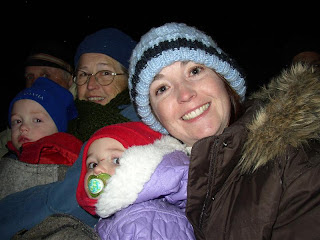