Besides a visit to a place akin to the bowels of hades and just about as hot (otherwise known as our latest investment property), Sophie has experienced some other historic firsts in the last few days.

She's starting to become a parade-car-style waver. I feel like she's a bit late to board the waving train, but it's not something we tried to teach her until recently. (We're not so big on goodbyes and tend to make them more matter-of-fact and less of a learning opportunity.) 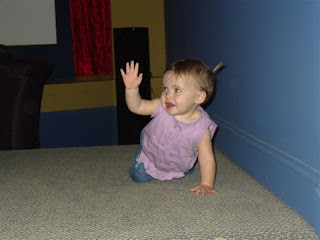 (I have to cite Shelly's blog for inspiration for this next part of the post. Her results to the following experiment were similar, possibly slightly more successful, than mine.) I decided to try ponytails today. Turns out, I may have been a little early on this effort, but the results were cute anyway. Here you see Sophie not only sporting her ponytails but also giving the pretty baby in the mirror a big open-mouth kiss (the only kind worth giving, as far as she's concerned). 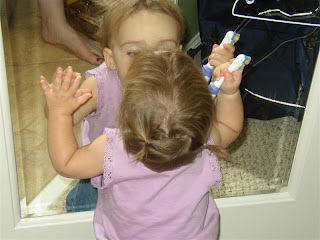 Here, along with the ponytails, Sophie coyly hints at her other latest first. Yep, she finally has a tooth! It's barely visible and in a pretty expected place, the front bottom. This development is much less interesting than Will's first tooth. He kept us in suspense for two months longer before popping out a weird top/side fang. 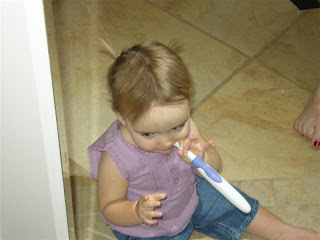 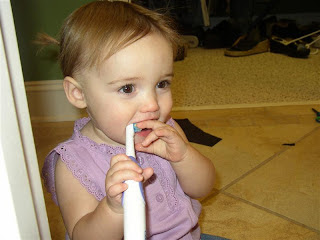 (P.S. I realize some of you may argue with my "ponytail" terminology, since I've debated this very issue with Andy. I'm not sure if it's a Northern/Southern difference or what, but our definitions on hairstyles differ and we are both equally convinced that we are right. Andy maintains that a ponytail is singular and pigtails are plural. I contend that number doesn't matter; a ponytail is loose and a pigtail is braided (a simple braid as opposed to a French braid or a plat.). Since this is obviously a very critical issue, feel free to post any strong opinions you may have. I don't think I'm going to bend on this, but I am glad to hear you out. I will say, though, that I have dismissed Andy's argument that "There is only one tail on a pony!" since there is clearly only one tail on a pig as well.)

I have to agree with Andy. I think one ponytail in the back of the head. While there are two pigtails, one located on each side of the head. I think pigtails can look like two ponytails placed on the sides or they can be braided.

I do agree with your statement that ponies and pigs only have one tail each, which kind of blows my theory out of the water. I had never really given it much thought before now.

I agree with Andy, but what do I know. I am the soon to be mom that can't even show up on time to her ultrasound!

I think the piggy tails comes from the curly cue of a pig tail and that is normally what little girls have when the are young, curly piggy tails. The pony tail is straight and one tail.

I'll have to side with Andy on this one... Piggies = two, pony = one. And her (insert the word of your choice here)-tails are so cute!!! They're like little stumps!

I must say I was truly traumatized when my Grandmother sent me to school with - count 'em - FIVE pigtails. I asked for two... I somehow ended-up with FIVE. Not four, FIVE. When I told her I didn't like them, she said that she spent so much time on them, that I was GOING TO SCHOOL WITH THEM THE WAY THEY WERE. Talk about a traumatic childhood? What would you call those? Penta-tails? Naw, that doesn't sound cute at all!

Call them what you want, they are ADORABLE! Sophie is the sweetest cutest little thing. These pictures made me miss her so much! I wish I could reach out and give her such a big hug! Molly

I, too, looked it up on Dictionary.com and based on that, I was ready to side with Kathy even though I have always called two ponytails 'pigtails'.

But THEN I looked it up on Wikipedia: "Pigtails (also known as angel wings and bunches) describe a hairstyle in which the hair is parted down the middle and tied into two bundles, one on each side of the head."

So, the debate rages on, though I kinda like the idea of getting rid of all references to animals' rear ends by using the term "angel wings" which fits sweet little Sophie so much better!!

Merriam-Webster online defines pigtail as "a tight braid of hair". I will side with Kathy!!!!

That Sophie!! She's my girl!!! I had written a previous comment, but it wasn't recorded on your blog. I'll try again by 'identifying' myself as 'anonymous'. I won't use the 'y' word, but that sounds like a north of the Mason-Dixon line of logic. Similar to 'only one ponytail per head'. True Southeners know that any girls' (or boys' now-a-days) hair that is gathered into a bundle in the shape of a ponytail is a ponytail. Andy, I'm surprised (a tactful way of expressing profound disappointment) that you still 'cling' to your 'Northern Exposure;.

As for the house that Kathy and Andy recently purchased, I can attest that it was a mess. I saw it up close and it was really a mess. I'm not sure it even qualified as a mess, but it will be a 'silk purse' in a few weeks, that is for sure.

I am shocked that Kathy, the astute business-woman that she is, failed to inventory the cache of fine literature found in the upper reading-room of this pending mansion. And to think that they (Andy and Kathy) poked fun (or maybe expressed sympathy) at us regarding a very similar purchase that we made. We even had the same kind of stylistic writing and artwork. As is said, "what goes around ...." Seriously, you two work magic!! I am so proud of you and what you do and how you do it!!!

Got to go. Don't have my glasses on and can't see what I'm typing anyway! I'm totally in the 'losing' decade' - losing teeth, losing seeing, losing hearing, - can the mind be far behind?

Great-grandmother always called my hair "ponytails" when parted in the middle and gathered into two cascades on either side of my head. When these cascades were braided, I had "pigtails". I must side with Kathy on this one.
Grandma Morris

I have always referred to two tails at "pig tails" and a single tail as a "pony tail". Shocking that you and I don't agree Kathy, since we're both GA girls.
I have a friend from Oklahoma that calls them "dog ears." This term bothered me for some reason, but I suppose dog ears is no more degrading than pig tails. And I think it does make more sense, given that barring a tragic accident, dogs do have two ears.

I have to say that if we're going to expand our vocabulary in the interest of peace, my vote is for "Angel Wings" over "Dog Ears"!