Although I did a pretty terrible job of documenting it, Will had a great 3rd birthday at the beach. We played in the pool, in the sand and at the beach house and went out for ice cream. The irony is that there were no less than five other kids helping celebrate, but somehow I managed to selfishly capture no one except my own little brood on film.

Will also had a special Home Depot/Lowe's themed cake, complete with awesome tool-shaped candles which were courtesy of Doug Carey. He also had orange (Home Depot)-iced cookies on sticks, courtesy of Shelly. (We love you, Doug and Shelly!) 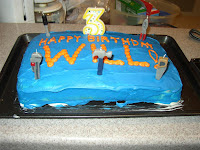 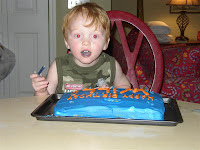 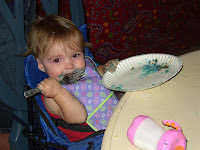 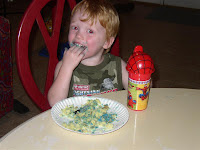 Will's gifts included a desktop fan, walkie-talkies, a teeball set, new markers and a coloring book. He also got a warm-up suit, new Spidey undies, a new Muppets book and a check (!) from family.
Posted by Kathy at 11:27 AM