You're watching a suspenseful movie, and the end is near. There's a fight between the hero and villain. The bad guy knocks away the hero's gun and disables him, leaving him for dead. The villain turns to the heroine and points a gun at her. There is dramatic, stalling dialogue. Behind the villain's head you see the hero crawl, using only arm strength and sheer determination, to reach for the gun. You feel his pain and empathize with his struggle. At the last minute, he obtains the gun and dispenses with the villain. Everyone lives happily ever after.

You know the crawl that consists of only arm strength and sheer determination. You've seen the desperate look in the eyes of the crawler. But what, you ask, does this have to do with my blog?

It's the Injured Hero Crawl, and it's Sophie's preferred method of transport these days. She also has a zero turning radius that would be the envy of even a Mini Cooper! 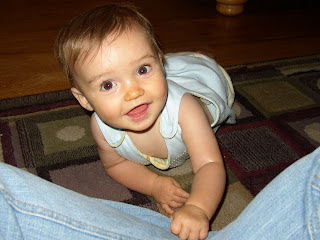 I love the narrative as much as the photo! It wasn't that long ago that Zoe was doing the "Wounded Soldier Behind Enemy Lines" crawl!! I think both names pretty well describe the process!!
Love, MOM

Kathy, I love your blog! I sent an email with a link to our blog. Your kids are adorable and I'd forgotten how hilarious you are. Excellent blog!