What's so wrong with being a numismatist?

I'm all for collecting. I collected stickers in elementary school. I collected charms on those awful plastic charm necklaces in fourth grade. At various times, I've started coin, stamp and baseball card collections.

But apparently, I've been too limited in the types of collections I've considered.

Apparently, I'm married to one of these crazies.

My husband has no interest in collecting books, stamps, postcards or even beanie babies. My husband has the following collections:

2) Cars (This is more of an aspiration at this point. However, in view of #1 above, I just realized that we have a total of nine garage spaces, so I live in constant danger that this collection will be launched. Thankfully, most of the spaces are leased to others.)

3) Arcade games, not to be confused with video games. We're talking about the full-size, cabinet models.

4) Jukeboxes. It turns out that this obsession encompasses, to a lesser degree, old radios and other music-playing devices, including Victrolas. No table-top versions, though - it's just huge floor models for us!

If I asked Andy about his other collecting ambitions, I'm sure the list could continue. But without further ado, the unveiling of his latest addition: Jukebox #5, a Seeburg 100J from 1955. 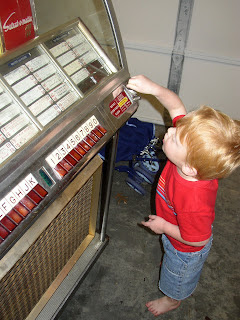 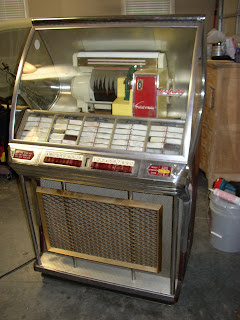 This is a somewhat concerning post...I am even willing to overlook Andy's addiction to expensive space consuming collectibles. Most concerning to me is that my sweet pure little Nephew appears to be starting young learning about collecting these sort of "toys".

SO fun you guys have another juke box, can't wait to see it! Molly