You know the saying about when something sounds too good to be true... The following was written back on Wednesday night.

I had my doubts about the 3-hour potty training exercise, but figured it was worth a shot. This morning was the chosen day, and I had all my tools assembled and my positive attitude resolutely in place. I had read the most relevant parts of the "Potty Train Your Child In Less Than A Day (Two Million Copies Sold!)" book multiple times and had it on hand for reference, and I even dropped Little Soph off at Mrs. Debbie's so all my attention would be on the task at hand.

We started strong with a productive visit to the potty. Unfortunately, after that we had trouble moving forward. According to the book, once your child successfully uses the potty, he should be so excited and take such pride in his new skill that he will begin to go at the mere suggestion that a potty visit might be helpful. From there, just bringing the potty up in conversation should be a good enough reminder, and after that, no reminder at all should be necessary. Now, I'm no expert on toddlers, but to accomplish this progression in half a day seemed a bit unrealistic to me. And let me say after experiencing today's events, in our case I believe it was an irrationally exurberant goal, as Alan Greenspan might put it. Just because Will CAN use the potty, it turns out, means neither A) that he will enjoy it nor B) that he will realize he needs to go prior to seeing a puddle at his feet. So that's where we stand now. If the typical child is trained in three hours using "the system", then rest assured that my child is not typical!

That said, I have a feeling for certain children at certain ages (and without a prior attempt at training to muck things up), this method might work quickly. For us, I don't think it was a waste. I hope I will look back in a few weeks and confirm that this was the jumpstart we needed. Although the day was not a smashing success, at least for now, Will is not in diapers. I think that would just confuse things further. He's asleep now wearing a pull-up but I plan to keep him in real undies as much as possible. We'll see if we're able to stick to that!

Wish us luck in this continuing endeavor. 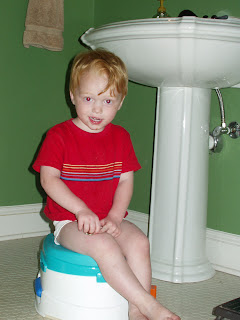 Did you try having him stand up to go potty? Maybe it would be like a fun game to get the pee in the whole! He can pretend he is a firefighter? Just a suggestion!!!

Looks like a lot of fun on both sides!