Some of you guys know that we've been attending a super-small church in a neighboring community on Sunday mornings as part of a little mission effort. We've been worshipping there since January, about six months. The people there, mostly much older, have been super sweet and friendly to us and the kids. Will's usual attire is a polo shirt and khakis, and Sophie wears one of her sundresses (mostly pink) with a hairbow. Last Sunday before church the minister "warned" us that he would be mentioning us in his lesson. Once he got up there, he proceeded to talk for two or three minutes about how children, and OUR TWO SONS in particular, were "blank slates" and we could inject whatever knowledge and encourage whatever beliefs we desired in them. And he must have made reference five times to "OUR SONS" or "OUR LITTLE BOYS". I whispered to our friends, "They really are blank slates, so we've decided to raise this smaller one as a girl!"

This has been a constant problem with Soph, and I can't imagine a more feminine and delicate-looking child. Older men ALWAYS think she's a boy, even men that should know better. It is true that she uses the same infant carrier we had with Will, which is blue. But it's navy, which I don't think is particularly gender-specific. And I promise that however practical, cheap and careless I may seem, I don't dress her in his old clothes. Most of her clothes are pink, and I love little hairbows and if anything I overuse them. Maybe it's the dark hair. Or maybe it's just that the "default" is boy in people's - and particularly men's - minds. 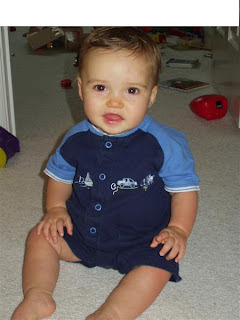 Could she pass for a boy?
(By the way, do you like the attractive wasteland of debris in the background of this photo? Yeah, that's Will's room in its usual state - sometimes it's worse.)
Posted by Kathy at 3:29 PM

First of all, no I don't think little Soph could pass for a boy! I think she is very feminine and beautiful. Second, did you literally steal the clothes off Will's back? I am pretty sure I see a little naked boy playing in his room!!

Holy cow! That freaks me out. My monitor was so dark, I couldn't even tell that it was him. Please see edited pic!

And I'm so glad I drew attention to this in the text of the post. Aunt Katie saves the day once again!

Kathy, I love the comment you whispered to your friends. I had to put my head down on the desk I was laughing so hard!!

How do these people miss the pink and the bows?? And she couldn't be any more beautiful!! Can't wait to see you all next week. Love, MOM

No way could sweet little feminine Sophie pass for a boy! It does seem that old men are especially oblivious, whoh also mistook Ava for a boy on a few occasions. Hello, we're wearing pink? Dress? Bow?

Anyway, Sophie is one of the sweetest faces of femininity, in my opinion!